4 Communication Patterns That Can Ruin Your Marriage 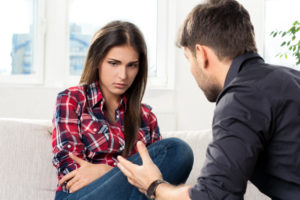 When I first got married, I’m pretty sure that everyone and their dog wanted to give me marriage advice. Some advice was practical. Some was silly. And some was just plain wise!

As the advice poured in, I began to notice a simple but common theme: communication. The need to communicate openly, to talk about emotions, to make decisions together, to speak kindly to each other — these and more came up as important needs to address in marriage.

Most people who gave me advice had little to no qualifications (other than being married themselves). But perhaps not surprisingly, research backs up the importance of communication in marriage! A 2014 study found that both how much couples communicate as well as how they communicate can really affect relationship satisfaction.

Through one longitudinal study, Dr. John Gottman found four communication patterns that can be really damaging to a marriage and even lead to divorce. Watch this *short video clip from the Gottman Institute for an intro to them:

No matter how wonderful your spouse is, you’ll probably always find things you could complain about. Maybe they forgot to take out the trash, maybe they leave their socks on the floor, or maybe they forgot to tell you they’d be home late. Whatever it is, you’ve probably had something come up that rubs you the wrong way.

While complaining isn’t the healthiest of practices, it can be outright damaging when you let it shift into the realm of criticism. In The Seven Principles for Making Marriage Work, Dr. Gottman explains that while complaining “focuses on a specific behavior or event,” criticizing “expresses negative feelings or opinions about the other’s character or personality”. A complaint would say, “I’m upset that you didn’t take out the trash like we agreed.” On the other hand, a criticism blows up the issue by making it a personal attack, saying something like, “You never remember to take out the trash! I have to do everything around here.”

So how can we avoid this damaging criticism in our marriages?

The Antidote: Express your needs and feelings using “I” statements.

Instead of criticizing your spouse, try to let him or her know what your needs are. Next time you’re feeling frustrated about the garbage (or anything else, for that matter), say something like, “I’m feeling a little overwhelmed and it would really help if you could take the garbage out. Can we figure out a plan together?” It’s okay to tell your spouse what you need; what’s not okay is turning your frustration into an attack.

If criticism goes unchecked, it can turn into outright contempt for your spouse. Dr. Gottman says that when issues go unresolved in a marriage, you’re more likely to experience these negative thoughts that have boiled up.

In the garbage example, let’s say your spouse continues to forget to take out the trash. You started out complaining, then criticizing. As the issue isn’t addressed properly, you start to view your spouse differently. When your spouse tries to suggest a solution to the garbage problem, you just laugh and say, “Oh, like that’s going to change things! You’ll never step up and help.” This contemptuous response shows a level of disrespect and a lack of affection.

Clearly, contempt isn’t a healthy communication pattern to have. So what’s the best way to prevent contempt from seeping into our relationship?

The Antidote: Treat each other with respect and show appreciation.

Instead of rolling your eyes or answering sarcastically when your spouse suggests a solution, take a moment to acknowledge his or her efforts. Remember, your spouse is a person too and deserves the same respect you do!

I think most of us are familiar with the deadly horseman of defensiveness. It can be all too easy to respond defensively, especially if we’re feeling belittled or hurt. Being defensive is a natural way to respond to criticism or contempt in an effort to protect ourselves.

In the garbage scenario, a criticism such as, “You never remember to take out the trash!” may be met with a defensive response such as, “Well if you didn’t keep nagging me all the time about it, maybe we wouldn’t have a problem!” Defensiveness only escalates the problem and pushes blame onto your spouse.

But what can we do instead when we start feeling defensive?

The Antidote: Accept responsibility for your part.

This antidote takes a huge amount of humility. While it doesn’t always seem like it, most problems aren’t caused by just one person. Your spouse may be freaking out too much about the trash, but you can take a deep breath and acknowledge your part in the conflict: “I’m sorry, I should have taken out the trash today. I totally forgot.”

The last of the four horsemen is perhaps the most deadly. After a long time of repeated negative patterns, a partner can get really overwhelmed. In fact, one study shows that damaging communication can lead a partner to become emotionally flooded, leading the partner to try to avoid the conflict altogether. In order to steer clear of a total explosion, the partner may simply withdraw and disengage completely.

If this garbage scenario has been going on for long enough, along with frequent use of the other horsemen in communication, then stonewalling could become a problem. When one partner tries to bring up the issue, the other partner may turn on the TV or just tune out altogether.

While taking a break can be good, stonewalling isolates partners from each other and can get in the way of healthy and positive communication. So how can we overcome stonewalling?

The Antidote: Take a break and cool off, then come back to the conversation.

When a situation gets too emotionally charged, taking a break is a good thing. Let your spouse know you need to calm down a little, but that you do want to figure out how to solve the problem together. Odds are, a break will help both of you.

It turns out that no couple has perfect communication all the time — even those people who gave me marriage advice. But as you look for the four horsemen in your own communication and try to use the antidotes instead, your communication can improve. And better communication really just means a better marriage!

In order to really benefit from what you learned, how about some practice? This week, keep a log of the four horsemen in your marriage. Keeping track of when you fall into those patterns will help you be aware and start to make those changes.

The Family Good Things team would love to hear about your experiences! Comment below to let us know how this homework goes for you.

*Watch the rest of the video here for an explanation of the four horsemen and their antidotes according to the Gottman Institute.