Working Together for the Best Sex Ed 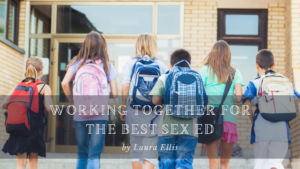 It was the first week of middle school for 12- year- old Maddie. She was excited, but nervous to start the adventure of middle school. Just as the tardy bell rang, Maddie slid into her seat at the front of the class. The class began with the ordinary introduction of material, including a “getting to know you” survey.  As she filled out the survey, Maddie was surprised to see a question asking students which pronouns they preferred. The survey also asked if the school could share that information with their parents.

Across the street, high-schoolers were being presented with a worksheet entitled, “The Gender Unicorn.” The worksheet was supposed to teach students about the differences between gender identity, gender expression, biological sex, and physical vs. emotional attraction. In a school that requires parent signatures for watching movies rated anything over PG, gender education was taking place without parental consent or knowledge.

The Debate: Moral vs. Secular

With the introduction of the Equality Act, incorporating sex and gender education in schools became a hotly debated topic. Of course, there are strong arguments for both sides of the issue, and the debate has left many communities divided. Educators are being asked to teach about a topic that covers both secular and moral principles. On the other hand, parents are mad about being left in the dark when it comes to the sex education of their children.

Our country is at a crossroads when it comes to the gender and sex education of our children. Whatever your views on gender and sexuality, our children are growing up in a society that includes pronouns and genders beyond he/she, male/female. Carrie Hunt clearly stated the issue when she said, “what once brought purpose, clarity, definition and identity to a child both individually and socially, now comes in so many varieties that many children struggle to find their grounding.”

What Can We Do?

So how do we help children find their footing? Should schools continue to push such education without parental consent in the name of protecting and leading children? Should parents try to shelter their kids from such education because only two genders really exist?

It seems the answer lies somewhere in the middle. Having a healthy understanding of sexuality and gender is crucial to finding purpose, clarity, and identity in life. Because of this, it’s important for children to receive some form of education on the topic. Parents and educators tend to see eye to eye on this. Over 93 % of parents feel that sex education is important for their middle and high school students. And 33 states have emphasized the importance of sex education by mandating it for public schools. The division then comes down to the lack of curriculum transparency between the school and parents. Surprisingly, only 5 of the 33 states that mandate sex education require parental consent in order for children to receive instruction.

Even though parents want their kids to learn about sex, many families fail to teach their children in the home. Data shows that this vital instruction is not occurring often enough. Maybe this is because parents don’t know  how to appropriately broach these topics with their children. That being said, national surveys find that nearly all teenagers have received sex education by the age of 18. Where do they get this education? Through public schools. Since gender and sexuality education isn’t happening in the majority of homes, public educators have taken upon themselves the role of teaching kids about sex.

For the most part, we can agree that parents and educators have the child’s best interest in mind. While parents are generally responsible for instilling moral values and religious beliefs in their children, schools are responsible for teaching secular subjects. But gender and sexuality education encompasses both secular and moral teachings.

Because of this, the best solution involves clearly defining the boundary between the two. With the ever-changing terms and ideas children encounter, schools should first and foremost encourage parents to be the preeminent voice in teaching their kids about sex. In addition, parents and schools must work together to decide on appropriate sex education curriculum. As parents and schools work together to establish an honest, transparent relationship, they will be able to clearly define the line between public sex education and private sex education. This open and transparent communication is vital in order to teach sex education in a way that allows our children to find purpose, clarity, and identity both at home and at school.

Laura Ellis is a Junior at BYU-Idaho studying Marriage, Family, and Human Relations. As a mother of eight, she is passionate about child and family advocacy. She has actively worked within her community to help change policies that threaten children and the family.